Home » Religion » Bad Religion: How We Became a Nation of Heretics 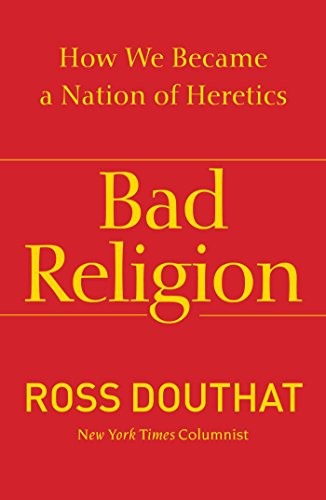 Bad Religion: How We Became a Nation of Heretics

The book that has sparked a vigorous national debate about the state of American religion, praised by Timothy Keller as “provocative” and “compelling,” while The New York Times says “Douthat attacks nonsense on both the cultural right and left…responsible and fair,” and the Washington Times raves “a superb documentation of America’s crisis of faith,” now in paperback.

AS THE YOUNGEST-EVER OP-ED COLUMNIST FOR The New York Times, Ross Douthat has emerged as one of the most provocative and influential voices of his generation. In Bad Religion he offers a masterful and forceful account of how American Christianity has lost its way—and why it threatens to take American society with it.

In a world populated by “pray and grow rich” gospels and Christian cults of self-esteem, Ross Douthat argues that America’s problem isn’t too much religion; nor is it intolerant secularism. Rather, it’s bad religion. Conservative and liberal, political and pop cultural, traditionally religious and fashionably “spiritual”—Christianity’s place in American life has increasingly been taken over, not by atheism, but by heresy: debased versions of Christian faith that stroke our egos, indulge our follies, and encourage our worst impulses.

In a brilliant and provocative story that moves from the 1950s to the age of Obama, Douthat explores how bad religion has crippled the country’s ability to confront our most pressing challenges and accelerated American decline.

This Book Has Balls: Sports Rants from the MVP

A Call to Action: Women, Religion, Violence, and Power